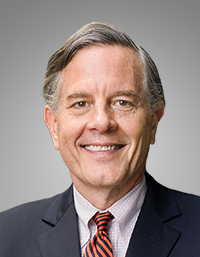 Daniel J. Ludeman, Sr. is the President and CEO of Concordance Academy of Leadership, an expansion of Project COPE, which assists individuals in successfully re-integrating into society from prison.
Mr. Ludeman is the former President and CEO of Wells Fargo Advisors, where he provided executive leadership for the nation’s third largest full-service brokerage firm. In this role, he oversaw numerous successful mergers, creating a nationwide financial advisor sales force and driving a focus on client advice and planning. He served as a member of the Management Committee of Wells Fargo & Company from 1999 to 2014. Mr. Ludeman began his career with Virginia-based brokerage firm Wheat First Securities, which after several acquisitions and mergers was acquired by Wells Fargo.
Mr. Ludeman serves or has served on the boards of the Securities Industry Association (Chairman), Eskimo Pie, the United Way of Greater St. Louis, the Missouri Botanical Garden, The Muny, CityArchRiver 2015, Washington University in St. Louis, the University of Richmond, the Urban League of Metropolitan St. Louis, the Federal Reserve Bank of St. Louis, Opera Theatre of St. Louis, and Variety – the Children’s Charity. Mr. Ludeman also chaired the St. Louis Regional Chamber and Growth Association and was a member of Civic Progress, St. Louis.
Mr. Ludeman holds a Bachelor of Science in Economics from Virginia Commonwealth University and a Master of Business Administration from the College of William and Mary.